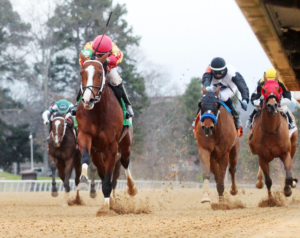 Breaking sharply under jockey Geovanni Franco, Storm Advisory assumed the early lead and proceeded through fractions of :22 1/5 and :45 1/5 for the first half mile. The winner maintained the advantage entering the stretch, shook clear and drew off to win by 2Â¾ lengths over Recount in 1:09 4/5 for six furlongs over a fast track. Apprehender, who had won the King Cotton in 2013 and ’14, came from last after a wide trip around the turn to get third.

“With the way he’s been training and coming along, it wasn’t a surprise today,” said Robertino Diodoro, who is currently Oaklawn’s leading trainer with. “It was a surprise was him being on the lead. The plan was to sit a little bit off of it, but he broke sharp and away he went. We’ll take it one step at a time, but obviously one of the goals would be to make the Hot Springs (March 11) and then the Count Fleet (April 15).”